After our relaxing few days in Rainbow Beach, we were more than ready for a bit of adventure on Fraser Island! We got the bus mid-afternoon and arrived in Hervey Bay a couple of hours later, having already met a couple of girls on the bus who would be doing our Fraser tour with us.

Once we were all checked in at Palace Backpackers, the place where our tour was run from, and where we’d be staying for the nights before and after the tour, we quickly settled into our unit (an apartment with 5 dorm rooms, a kitchen and lounge area) and got chatting to our fellow Fraser buddies. Then it was time for our orientation, where we met our tour guide, Rango, and got put into groups for cars and food before heading off to the supermarket to get our supplies for the next three days. That evening, we just chilled out and had a nice evening getting to know everyone in our unit before bed and a hectic three days.

Day 1:
We were up super early for our briefing (or rather, to watch a DVD on how to drive the 4WD on sand) then, once our cars were packed up with all our gear, we hit the road and made our way to the ferry. Rach was driving and (after a bit of a rocky start) loving it…she even managed to get the car up onto the ferry…quite a feat considering the distance it was raised from the ground on one corner!

After about half an hour the ferry we reached our destination and drove the bumpy track road straight to our first stop, the gorgeous Lake Birrabeen, where we swam and played for an hour or so. Then it was off to a place called Central Station, located in the centre of the island (duh), for some lunch – warm sandwiches and crushed crisps. After eating, Rango (our guide) gave us a quick history lesson about the first people who lived on the island and about all the different animals that lived, and still live there, including various birds and mice and, of course, the dingoes…these creatures think they own the land! 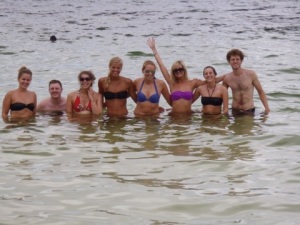 We went for a walk down to a little creek which had the clearest water I think I’ve ever seen, and then it was off to the holy grail of the island, Lake McKenzie. I’ve honestly never seen something so spectacular…when you walk down the pathway and the white sand and bright blue expanse of water opens up in front of you, it’s absolutely breathtaking…there aren’t really any words to describe it. We stayed there for about an hour, swimming and chatting and playing games…just enjoying the scenery. We even made an attempt at the human pyramid!

Rango had to pull a reluctant group away from the beauty that is McKenzie and hurry us into our cars so that we could make it to our next stop, Lake Wabby, in time so we could get to our campsite before dark. This time we drove along the beach instead of the inland sand ‘roads’, which was awesome…to have the waves crashing on one side of the car is a sight to behold. Lake Wabby is about a 40 minute walk from the beach and boy was it warm…we were all so happy to reach the water, which is located at the bottom of some very, very steep sand dunes. After about half an hour it was time to head back to the cars and on to camp, a permanent campsite just for our tour, with large tents and a big trailer containing everything we would need for the next few days. We spent the next half hour or so swatting away the huuuuge marsh flies (it hurts when they bite, but mostly they’re just annoying), organising our tents and then it was time to cook our dinner – a delicious barbecue of burgers and sausages – before playing a few drinking games, having a chat and crashing pretty early after an awesome but exhausting day.

Day 2:
We rose a bit later on our second day, after a fairly uncomfortable night’s sleep in the tents and by about 9am we were all in our trucks and raring to go. There’d been a bit of a switch around in the cars due to the fact that there were only 6 drivers out of a group of 28 (not the greatest ratio!)…so on this day we had an awesome car, filled with all the friends we’d made on our first evening in Hervey Bay – myself, Rachel, Rosa, Joe, Niamh, Malin and Gwen…best car ever!

This morning Gwen was driving and we headed north up the beach until we reached a small plane that would take people for scenic flights over the whole island. Quite a few people went for it, myself not included…big commercial planes aren’t my favourite thing in the world, so I wasn’t that enamoured by the idea of going up in this tiny one! The people who did go up in it though (Rachel and Rosa included), all said it was amazing, and that they got some incredible views. While they were up in the air, Rango showed us how to get revenge on the marsh flies…swat and catch them, pull off their lower body and squeeze out their honey sack…i know, it sounds gross, but it’s actually so yummy…a nice little snack!

Once everyone was safely back on the ground we headed further up the beach to a place called Ellis Creek, a very clear, very cold stream of water deep enough to swim in. Unfortunately our guide set us off walking up the creek (with out cameras and waterbottles etc) and failed to tell us that the whole idea is that you’re supposed to walk upstream along the boardwalk and then float back downstream, back to the beach. So we didn’t get the full effect, but it was a nice place to have a dip and just cool off for a few minutes.

Finally it was my turn to drive and, after being quite apprehensive (read cowardly) about it for the first day, I absolutely loved it. Bombing along the sand and driving through all the various little streams of water making their way out to the sea, there really isn’t anything more fun! After making a quick pit-stop for lunch, I drove us (following behind Rango of course) a long way up 75 Mile Beach to the Maheno Shipwreck, an absolute beast of a thing. It’s been sat in that same place on Fraser for the last 76 years, and has eroded down to nearly nothing (compared to how it started). It was absolutely spectacular to see it up close, and to watch the waves crashing up, over and around this huge rusty wreck.

Then it was on to Indian Head, a coastal headland on the most easterly point of the island and at the far north end of 75 Mile Beach. When you climb to the top it provides some of the most spectacular views, both of the island itself and out to sea. Next up was the Champagne Pools, big water-filled crevices in the rocks that were carved out by the Aboriginals to help them catch fish. We had a bit of a ‘mare getting up the steep hill that leads to the pools, as our truck got stuck behind someone else in our group who had stopped, so i had to reverse all the ay back onto the beach and, in Joe’s words ‘rev it like a b****!’. I did exactly that, and, with the car roaring and all the passengers screaming as we carreened up the bumpy hill all the way to the top…lets just say Rango wasn’t impressed with all the noise. Oops! We enjoyed it. Anyway, after all that excitement we made it down to the Champagne Pools…when the waves crash into the pools, there are little pockets of air, causing the water to bubble…just like champagne! Unfortunately when we were there the waves really weren’t big enough to even reach the pools properly, so it felt more like we were just having a communal bath than in a natural jacuzzi…but it was fun all the same.

After our quick stop here, I switched places in the car and Gwen took the wheel again and drove us back to camp (via Ellis Creek again for a quick dip to wash the salt off from the Chamoagne Pools). We were on a high on the journey back and rolled into camp singing and laughing, much to bemusement of everyone else in the group. That evening, after cooking our basic dinner of pasta and tomato sauce, it was time for some more drinking games. Out came the cards, out came the goon, and we had a very merry old time…by the end of the night, there were only a few of us remaining, and we just sat chatting for hours before finally heading to our tents for a good night’s sleep.

Day 3:
It took a while to fully pack up camp and get everything put away into the cars on our last morning in camp, but by about ten past nine we were on our way to our favourite place…Lake McKenzie! However it seemed to take forever to get there and just as we thought we were finally nearly there, Rango’s jeep got a flat tyre…disaster! A seasoned expert in changing tyres though, Rango was ready to go again in about 20 minutes, and we eventually made it to the Lake which was just as beautiful as we remembered it from two days earlier. A gorgeous few hours were spent there, just floating about in the water, using the silica sand to wash ourhair and bodies. Again, we really didn’t want to leave.

But leave we had to, so off we went to the pier to catch our ferry back to the mainland. About an hour or so later we were back in civilisation at our hostel in Hervey Bay. The next few hours were spent showering (we definitely all needed a good wash), sorting out our bags, and looking through our photos from the last few blissful days, before it was time for our delicious treat of all-you-can-eat pizza for just $10! Let’s just say there were some pretty full tummies that night!

It was an incredible way to spend a few days and we made some amazing friends who we should be seeing on and off now for the rest of our travels in Australia. I’d recommend a trip to Fraser Island to anyone! 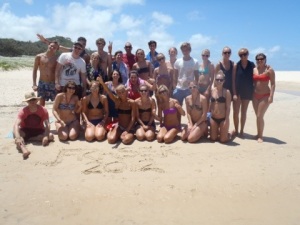 One thought on “Revving It On Fraser Island”