Whenever I’ve said to anyone ‘oh I’m going to Cairns soon’, their first response is always ‘you HAVE to stay at Gilligan’s, it’s amazing!’. So we did. And it is. Amazing, that is. In fact it’s more of a hotel than a hostel, with rooms ranging from private two bed rooms, right up to the largest 10 bed dorms.

On each floor is a kitchen and TV/lounge area, meaning that neither space is ever too crowded at any time of day, and the kitchen always pretty clean and well equipped. They also serve a free evening meal every day down in the bar, so most people eat there anyway (the meals range from bangers and mash, to curry, to chile con carne…and they’re fine, not the tastiest, but they’re free, so what do you expect?).

We were in an 8 bed dorm with a balcony on the 2nd floor, and I have to say its a pretty brilliant set up. There are 4 bunk beds, plenty of space for all your stuff, and a bathroom area with separate doors for the shower and toilet, meaning that more than one person can use the facilities at the same time (i.e. you can brush your teeth while someone’s in the shower). For this we paid $25 per night…not too bad at all. They also do a deal where you get 5 nights for the price of 4, which is pretty sweet, and if you’re staying even longer you can usually work out some sort of deal to get it cheaper too.

The hostel and staff are great and very helpful, and there’s even a travel desk right in the reception area, full of awesome travel advice about trip around Cairns and beyond. They have travel/adventure deals on every day, and I’d definitely recommend doing a few of them. Of course, there is also Internet available…Global Gossip is the way they do it here, so it’s $3 for an hour on the computers or $8 for 24 hours of WiFi…not cheap but not too bad. If I were you though, I’d go across the road to a coffee shop called Candy, buy a drink, get their WiFi code and then just use that in the evenings after they’ve closed. Okay, so you have to sit on the pavement like a tramp, but hey, it’s free WiFi…and that’s hard to come by in this country!

So Gilligan’s isnt bad, in fact, its pretty awesome actually. My only three negative points about the place are:

1, there aren’t enough plug sockets in the rooms…in an 8 bed dorm we only had two sockets between us, which can cause a few issues when everyone wants to charge stuff at once.

2, while the separation of toilet, sink and shower is an excellent idea, it would be great to have another door to the bathroom area itself, as the tap is quite noisy, and it’s hard to be silent when brushing your teeth at 6 o’clock in the morning!

3, the cleaning staff are quite rude and invasive. Yes, it’s great that the rooms are cleaned daily, but they just seem to barge in at whatever hour they feel like in the morning and start hoovering. Not a hello, not an excuse me…it feels like we’re more in their way than anything! 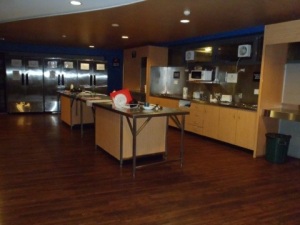 But, rant over, if you’re ever in Cairns (yes I’m going to say it)…you have to stay at Gilligan’s, because it’s amazing!