So I’ve been in Cairns for just under two weeks. Yep. Two whole weeks. Let me just begin by saying that while it is a very nice place, Cairns is not somewhere you want to spend two weeks with not very much money. We arrived last Monday evening and were met at the bus stop by Laura (our friend from, well, all over the place), before being taken to our hostel, the infamous Gilligan’s, in the centre of the city.

We spent our first few days just wandering around, getting our bearings and generally being a bit bored. We went to a lot of coffee shops, and had a few good nights out…one of which included Shell winning the dancing competition at PJ O’Brian’s pub and getting us a $100 bar tab! 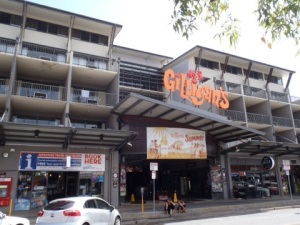 After all this doing nothing we were going a bit stir crazy so thought we’d head out for a bit of culture, and visited the Cairns Regional Art Gallery and the Contemporary Arts Centre, the latter definitely being the better of the two, with an enormous model of a woman lying in bed catching all of our attention. There was even an interactive exhibition where you could sit down and draw self portraits and put them up on the wall, installing yourself into someone else’s artwork. 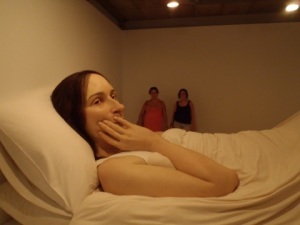 Culture over, we went back to being the lazy, crazy people that we are, doing nothing, sitting in coffee shops (using their free wifi), making silly videos and generally being pretty hyper. In the mood for a fun night out, we used up Shell’s bar tab winnings then found this awesome karaoke place. Well, I say it was a karaoke place, but really it was a Japanese restaurant with private booths and karaoke machines….it was honestly the most fun I’ve had in ages, singing along to all our favourite tunes, we could have stayed there for hours!

For Shell’s last full day with us we’d booked a snorkelling trip out on the Great Barrier Reef so, very early in the morning, we found ourselves down at the ferry terminal and climbing aboard our boat for the day, the awesome Passions of Paradise. This is a boat and company that have won quite a lot of awards recently, so we were expecting big things. And I’m pleased to say we weren’t disappointed. The staff were brilliant, always entertaining and on hand whenever you needed them. After about 2 hours on the boat we reached our first snorkel spot (Paradise Reef) and, after donning our very sexy stinger suits, jumped straight into the water. The coral o the reef was one of the most amazing things I’ve ever seen, so bright and colourful, and some of the fish had the most incredible patterns. After a hour or so of this, it was back to the boat for a delicious lunch before we moved on to our next snorkelling destination, the beautiful Michaelmas Cay, a small and protected sand island. Again, swimming around looking at the reef and all the sea creatures below was somewhat surreal but still absolutely incredible. After this it was back to the boat for a spot of sunbathing as we made our way back to Cairns and dry land.

That night we were pretty exhausted so just hung out at our hostel and went to bed fairly early. Shell left early on Monday morning to head back to Melbourne, and a few hours later Rachel arrived from Townsville, ready for another week of ‘fun’ in Cairns.

This week of fun started off pretty slowly…again we just didn’t really do much, just hung out at the hostel, chatting, reading, all those boring things you do when it’s just too hot outside! Laura left us early on Tuesday morning and then the week got really interesting (or not)…for starters we had to move rooms as ours was having building work done, Rosa and I went to the cinema to see ‘The Vow’ (anything with Channing Tatum in is okay by me), we went shopping in the mall to look for a New Zealand guide book ($41…no way!), went back to the Contemporary Art Centre to show Rachel, and we even managed to squeeze onto a scuba dive trip on Saturday, after being told that we’d left it too late to book…it was absolutely incredible, perhaps one of the best things I’ve done in Oz. You can read all about my diving experience here. 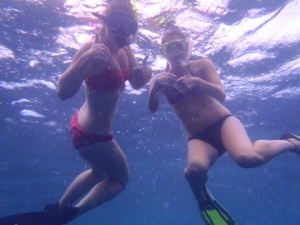 Then it was time to pack up our lives and get ready for New Zealand…our next big adventure!