Let me just start by saying that I love Melbourne. No, seriously, it has to be by far one of my favorite cities I’ve ever been to. It has everything I could ever want…shops, bars, restaurants, museums, cafes, cinemas, open spaces, a beach, and even a free tram service!

Rosa and I arrived last Thursday morning after a fairly long journey (due to delays back in Singapore) and got to our hostel, the awesome Home @ the Mansion, for about midday. After a few hours (of much needed) sleep we headed out to the surrounding area for some food and to see what the city had to offer. Then it was back to the hostel to wait excitedly for Rachel to arrive. And at about midnight, arrive she did!

Our first full day started in a rush…I was supposed to be meeting Vicky in the city to go on our Neighbours tour, but my watch was running 10 minutes late (which I didn’t realise), so I ended up absolutely legging it through the busy streets to get there (vaguely on time)! Luckily they waited for me, and we set off to see where Karl, Susan, Toady and the gang live. It was quite a strange experience, to actually be there, standing on the real Ramsay Street…it was much smaller than I had imagined, and what was even weirder was that people actually LIVE in the houses…how cool is that?!

After the tour it was back to the hostel where we met up with Rachel, Rosa and Matt and headed out to a nearby park for a picnic before a spot of shopping on Bourke Street, essentially Melbourne’s own Oxford Street. After that it was time to soak up some culture so we made our way to the south side of the city and went to the Screen World exhibition at the ACMI museum which was absolutely amazing. The exhibition depicts all sorts of film and media since it’s very early beginnings, from silent films all the way through to movies on our iPhones! A lot of it was interactive, with buttons to push and things to play with…there was even a little camera booth where you could recreate the slo-mo scene out of The Matrix. Incredible! After a few hours spent in here, our group split, with Matt and Vicky going back to Matt’s family’s house and the three of us making our way back to the hostel and out for a yummy dinner. 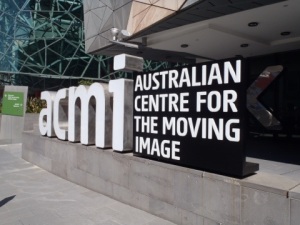 The next day we had a bit of a lie in before meeting Matt and Vicky at Queen Victoria Market, which is absolutely huge and sells everything and anything, from meat, to wine, to cheese, the fruit, to shoes, to bracelets and beyond! We wandered around for a few hours and then made our way south to Batman Park, right on the river for a picnic and to laze about in the sunshine before jumping on the city circle tram (awesome and FREE) back to our hostel for some chilling time and to cook dinner in the hostel kitchen.

We woke up on Christmas day with the excitement of little children. Okay, no, not really. Australia isn’t really the most Christmassy place to be honest…it just felt like any other day really. What did make it special though, was that we’d been invited round to Matt’s family’s house (the wonderful Malcolm and Emily and their two boys, Byron and Ethan) for Christmas dinner and to stay the night. So we got the train to Dandenong and arrived at their house at about 3pm, ready for some Christmas cheer. And that is exactly what we got, as well as an absolutely delicious dinner. It was so lovely to be with a family in a proper house for Christmas, instead of with all the other misfits at the hostel doing nothing like it was just any other day. So we say a big big thank you to Malcolm and Emily for inviting us into their home.

On boxing day we all piled into two cars and headed for Healesville Sanctuary, as wildlife park with only native Australian animals, which was awesome. We saw Koalas, Kangaroos, Dingoes, reptiles and all sorts of birds…so much fun! After that it was back to the city and our hostel, where I finally skyped the fam (who were/are in Mauritius for Xmas and new year). It was so nice to see them all and hear their voices but it did, for the first time, make me feel a little homesick for everyone and everything I’ve left behind in England. But that’s only to be expected I suppose… 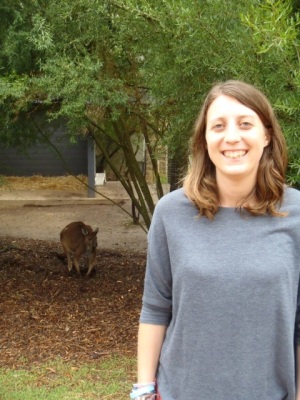 Our last full day in Melbourne was spent mostly trying to fill out a whole heap of visa forms for when Rosa and I head to America to work in the summer…lets just say it was pretty stressfull and we didn’t really feel like we achieved much. After a quick lunch, we met Matt and Vicky at the at rental place, only to find that they were shut and we had to go all the way to the airport to get it…well, I say ‘we’, I really mean, Matt, Vicky and Rachel. Me and Rosa stayed behind in the city and did a bit of sale shopping before dinner and bed…it had been a tiring few days.

Today we were supposed to be starting our drive to Sydney, but instead we thought we’d head the other way and drive the Great Ocean Road which, as the name suggests, takes you all the way along the coast, stopping at various little beach towns and sights. It was an incredible day, the best bit probably being at the end when we stopped to see the Twelve Apostles, great rock formations jutting out of the sea. Now we’re back at Emily and Malcolm’s (they were kind enough to put us up for another night) and tomorrow we’re off to Sydney!

One thought on “Exploring Melbourne”