After our not so great experience at the Base hostel in Sydney, you’d probably think that we wouldn’t have stayed at another Base. Well, you’d be right…except that we’d been given vouchers from Wicked travel for Base Central in Brisbane which meant that we’d only have to pay $18 per night…an offer we couldn’t really refuse!

Immediately upon arrival we knew it wasn’t going to be luxury living…the first hint was the fact that we got to our room and our sheets were dirty…really dirty, so we had to change them ourselves! The second clue was the state of the kitchen…honestly it was so filthy and disorganised, the thought of cooking in there still makes me want to cry. The surfaces were all covered in food and grime, the fridges were randomly placed around the room and always full to the brim (and usually smelt rank too), no one ever did their washing up, and the cookers were those rubbish camping stove type things…not exactly what you expect from a large hostel chain. Also there was only one toaster and one microwave…definitely not enough when there were always at least 25 people in the kitchen at any one time!

The issues with the hostel don’t stop in the kitchen though…our room was a whole other story. We were in a 10 bed dorm on the 1st floor which just happened to be all girls at the time we were staying there. And boy was it messy. There were bags and clothes EVERYWHERE,…there was even a note on the door when we arrived to all the people staying in the room saying they had to clean it up. Obviously every room is different, and it’s just luck of the draw as to whether you get good roommates or not, but let’s just say our weren’t the best. Base offers rooms ranging from 2 beds to 10, all for varying prices…some rooms (and floors) are much nicer than others. Halfway through our stay we moved to a private 3 bed dorm on the 3rd floor (due to a peeing incident with one of our roommates…see my Brisbane post) and this was way better.

Now on to the staff. I’d like to say there were brilliant. I’d like to say they are the hostel’s one redeeming quality. I’d like to say that. But I can’t. Throughout our stay the staff were rude, impatient and, above all, clueless. They were grumpy and never paid attention, meaning that even the simplest question or request took about 20 minutes (at minimum). Also, there was only ever one member of staff on duty at night…for the whole hostel! However, there was one member of staff, Kate, who was absolutely lovely, and so so helpful to us the morning after the peeing incident…she sorted us out with a new room, helped us wash Rosa’s stuff, and even gave us food and drinks vouchers…legend.

Base Central has the standard computer/wifi set up, with a number of computers for guests to use and their usual $8 for 24 hours of wifi. Not bad, but not great either. There is a lounge area by reception, a luggage storage room and apparently there’s also a TV room, which we never actually found, as it’s very well hidden (apparently on the 2nd floor somewhere). There are two bars downstairs, Zi Bar, which does great food a drinks and the slightly noisier Down Under Bar…when I say slightly noisier, I mean expect to be kept awake until the early hours as the music just never stops! 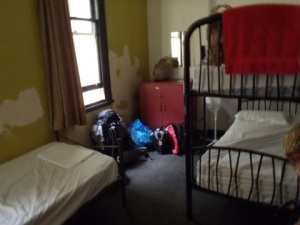 The hostel’s one good selling point though is the location…right in the CBD and close to everything you might want to see or do in the city. This was great…just a short walk to the Southbank or the Botanic Gardens, but it definitely wasn’t enough to make me want to stay at Base ever again!