So we’ve had our annual travel round up post, but what about some stats to go with it? I haven’t done any spending summaries since October because, frankly, my life in London is a tad tedious, as I’m just working to save more money for the next travelling adventure (there are some loose plans, but nothing is confirmed yet… when I know, you’ll know!), and any money summary would basically just be telling you what I spent on coffee and food and random stuff. Not very interesting.

But now that it’s 2015, I thought I’d do a post that covers the entirety of last year, including spending, distance and any other various things I can think of – more because I’m actually quite interested to see what almost a year on the road set me back than any other reason. While I know that travelling isn’t cheap, I’m almost scared to ask the question…what did I spend in 2014? 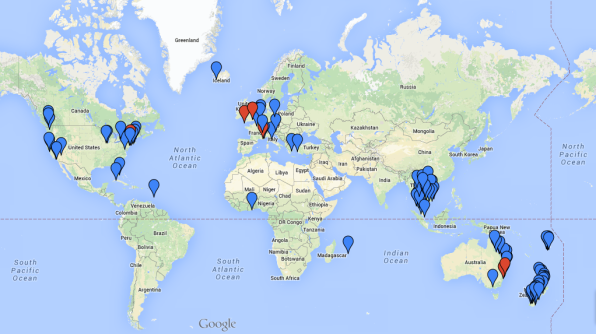 Highest monthly spending: January at £1229.27. It was the trip up the Oz coast to Byron Bay that did it. Money well spent.

Lowest monthly spending: April at £110.62. Living on the farm was pretty good for my wallet.

Cheapest country: Mauritius (but that’s probably because I was on a family holiday, so wasn’t really spending anything!). The USA and UK come in basically tied at a close second, as I didn’t pay for accommodation in either place, so it’s just general living costs I had to deal with.

And that’s it. My year in numbers. It’s quite cool to be able to look back over the last 12 months and see where I’ve been, how I’ve travelled and what it’s cost me. I wonder if I can keep the costs that low in 2015?!