Vietnam is a funny place. It’s exactly as you picture it and yet at the same time it’s the complete opposite to everything you ever imaged it would be. It is loud and bold and a little bit mental, but there are also pockets of the serene and calm and happy too. The one thing that really rings true is the rules of the road…in that there are no rules. At all. You pretty much have to take your life into your own hands every time you attempt to cross the street.

After our hellish 30 hour journey from Vang Vieng to Hanoi all I wanted to do was get some food in me and go to bed. To be honest I really had no interested in exploring the city we had come all that way to see. But the next morning, after a good night’s sleep (interrupted only by Rosa’s late night drunken antics…she’d gone out with some people we’d made friends with on the bus and come back a little worse for wear), I was feeling much more positive. So Maritza and I headed out for a wander around and to visit a nearby temple (which was unfortunately closed when we got there) and the huge Don Xuan market, selling literally everything you can think of, from food to fabrics and all that lies in between. 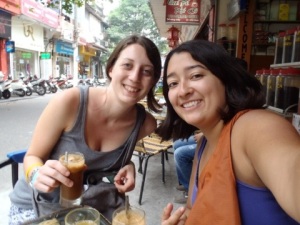 We then went to meet up with our new friends (Shannon, Kayleigh and Katy from England, and Amy and Ken from Ireland) from the bus for some lunch and to check out prices for a tour of the nearby Halong Bay. In the end we actually all decided to do various trips in our own groups as each of us was after something different, so in the afternoon we went our separate ways, agreeing to meet up that evening for dinner.

With Rosa hungover, and Maritza also feeling a little under the weather, I ventured out into the city on my own, to see the large Hoan Kiem Lake that sits in the centre and the little temple in the middle of it. Walking around that lake was quite surreal, as you are surrounded by the noise and traffic of the city and yet you can’t really hear any of it. It’s like finding a little piece of quiet and tranquility in such a noisy city of madness. You block out the cars, the honks, the dust and the smells, and instead replace it with this sort of serenity, an inner calm. 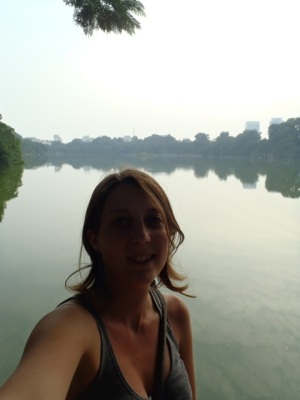 That evening Rosa and I met up with Shannon, Kayleigh and Katy for a delicious dinner at a veggie restaurant called Tamarind, where we shared stories and laughs…it was nice to meet some other travellers and hear their tales and get suggestions of places to go and things to do.

The next day the three of us were picked up early by Vietnam Star Tours and drove for about 4 hours out of Hanoi to Halong City where we boarded a junk boat and set out for the bay, a beautiful and awe-inspiring range of broken cliffs. First we stopped at a floating village and had a lunch of freshly caught and cooked fish with various other Vietnamese delicacies. Then it was off to one of the oldest and most magnificent caves in the area (although I can’t remember what it was called), with it’s large stalactites looking as though they were dripping from the roof of the cave. Then it was back to the harbour and onto the bus for the long journey back to Hanoi. 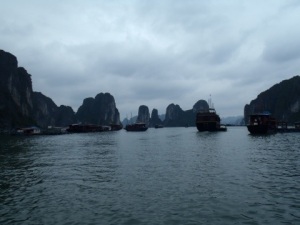 Yesterday, our final day in Hanoi, was spent mostly just relaxing and wandering about the city, before getting ready for our 12 hour overnight train journey to Hue, about half way down the east coast of Vietnam. We’d bought the train vouchers the day before, but had to exchange these for proper tickets when we arrived at the station…this was our first error. We didn’t really know where to go or who to ask so instead we stupidly just sat down to wait for our train. All of a sudden two Vietnamese people were talking and shouting at us, telling us the train was about to leave from station B (we were apparently at station A)…how they knew what train we were getting I have no idea! They took our vouchers and came back with four train tickets (we’d bought an extra one so that we could have a four bed cabin to ourselves). That was our second mistake. We didn’t have time to check the tickets the guy had handed us and so we somehow ended up with two beds in one cabin and two in a different cabin…definitely not what we had planned or paid for. We should have really been more prepared, arrived at the station earlier and double checked that the tickets we got matched our original vouchers…lesson learned. 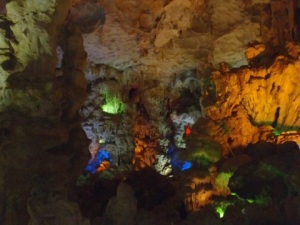 After talking (or try to talk, mostly with over exaggerated hand gestures) to one of the train staff we found an empty cabin and set up for the night in there, hoping that no one would turn up to claim it. But unfortunately, about an hour or so into the journey, just that happened, and we got into quite a heated debate with the man who’s cabin we were in…not because we wouldn’t move (we did, and pretty quickly), but because he was being extremely rude and not at all helpful…all we wanted him to do was to translate for us, to make the train staff understand our dilemma – that we’d paid for a whole cabin and felt that that’s what we should have got! In the end however, after pretty much everyone on the train had got involved, we just couldn’t be bothered to argue. So there we were, in different cabins (and different coaches on the train), me and Rosa in one and Maritza and the empty bed in the other. Fun times. But we had no choice other than to just had to deal with it, so bedded down for the night, and waited for daylight, when we could put an end to yet another hellish journey.

We eventually arrived in Hue at about 8:30 this morning and checked into the Valentine Hotel, a lovely little family run place in the main tourist area of the city. And so here we are, in Hue, which seems nice enough so far…off on a tour of the city tomorrow and then I think it’s time to hit the beach!

One thought on “Good Morning, Vietnam!”