There’s not really anything you can fault the Z Hotel on to be honest. It only opened in September so of course there are a few little kinks, which is as to be expected, but on the whole our stay here was really pleasant. We were in a triple room, with one double bed and one single, both of which were ridiculously comfy. We also had air con, a TV and a fridge (which they filled daily with free bottles of water). But the best thing was the bathroom, a large-ish space, newly decorated with stone floor and bamboo on the walls, and a pretty powerful shower (with shower curtain…always a plus, so that everything doesn’t get completely soaked!). For this room we paid $8.58 each, which is more than we’ve been spending recently, but for Koh Samui, it’s not a bad price…in fact it’s pretty cheap!

The hotel is also in a fantastic location…Chaweng Noi, just south of the lake at Chaweng Centre…and thus far enough away from all the main noisy bars, but close enough for an easy stroll when you want to be in the midst of all the hustle and bustle. It is also just steps from the beach (about 30 seconds walk), with beautiful white sand and blue water. Unfortunately the weather was pretty rubbish when we were there so we didn’t get to sample the beauty of the beach, but I’m told it’s great. And if it does rain during your stay there’s plenty of good restaurants and bars to just sit in and while away the time until the sun comes out. 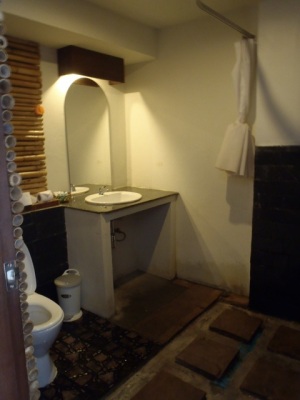 There is also free wifi, although it was a little temperamental at times, and there are computers downstairs for hotel guests…for a price (60 baht bought you an hour of internet time). The staff at Z were lovely too, always willing to help you out with tours and tickets, whether it be to the Full Moon Party on the neighbouring island of Koh Phangan, a tour around the island, or for the boat back to the mainland…there’s something for everyone here.